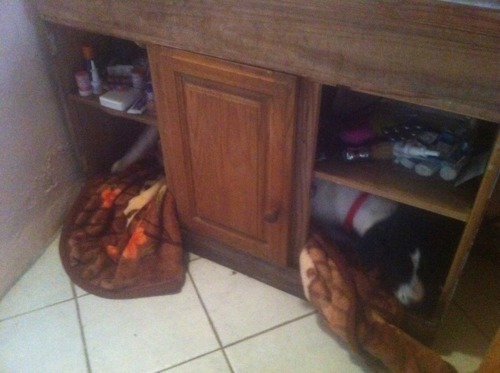 Maggie and Sam have had different reactions to South Africa.  Maggie thinks it’s great that I spend all day in the rondoval working, and she’ll just lay on the couch staring at me lovingly.  She also has an extremely bad reaction to thunderstorms here (see pic above).  I made her a “cave” to hide in under the sink that helps with the storm anxiety.

Sam has decided that in Africa you have to be the defender of your domain.  He patrols the area around our house and then makes expeditions into the wild (GGA grounds) where he is sometimes gone for an hour to claim more territory in the Reynolds name.  I strongly discourage this behavior and we are still working through being a good friend to the other dogs.  I don’t know what he does when he’s gone, but I notice that sometimes he’s running back at full speed with a wild look in his eyes.

A few days ago Maggie found the big stick of butter I left out from cooking my pan toast for breakfast.  Unbeknownst to me she stole it off the counter then took it to a corner and I suppose spent some time licking it and decided it was her favorite thing.  When I found her she was using her nose to very carefully place strands of a too-long extension cord into a pile behind the cabinets.  Slowly it dawned on me that she was trying to “bury” a prized possession and I wondered what it could be.  Then I remembered that earlier I had tried to put the butter back in the refrigerator but that I couldn’t find it. Then I thought that maybe it was ridiculous that I didn’t go look for it right then because, honestly, where could the butter have gone.

So I dug out the mostly eaten huge stick of butter and took it to the trash can, because half eaten, dog-licked butter is not the kind you put on your toast.  That night I came home, opened the door, and immediately thought maybe one of the dogs had a pooping accident in their crate, but it was just Maggie expelling the most noxious gas I’ve ever smelled in my entire life.

So now you know a new fact, too much butter makes dogs gassy.